Our effort began in 1998, with our first BBQ at Aptos Creek Park.  The idea was to have a 4th of July BBQ while raising money for Cystic Fibrosis Research Inc. It was the birth of our group’s original concept of “Friends & Family of Gianna Rose Altano” now known as Friends Cure CF.  Members of the Friends & Family of Gianna Rose Altano wanted to raise money to help families who run into financial difficulty dealing with this disease and their medical bills. Fortunately, we had always been able to give all profits to C.F.R.I.

We now realize one of our original goals of helping people with C.F. by partnering with “The Living Breath Foundation”.

Who is Gianna Rose?

She is Marissa’s sister, a surfer, a volunteer at the Seymour Center, a brown belt in Gung Fu, an amazing young woman, an Altano, and loved by all.

Gianna was diagnosed with Cystic Fibrosis at four months old after getting pneumonia and not gaining weight (called failure to thrive  in the CF world). Gianna embraced life and never let CF determine who or what she is.

After 23 years of the most courageous fight, Gianna is now breathing easy in heaven.

Learn more about how it all began by reading the story in Danny Altano’s own words.

We are thrilled to be named Aptos Chamber’s 2016 Organization of the Year! 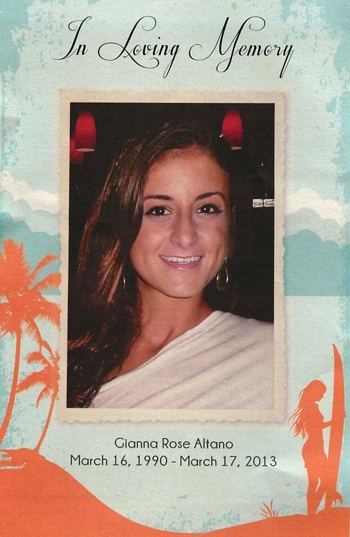